Posted on January 22, 2012 by globalciviliansforpeace 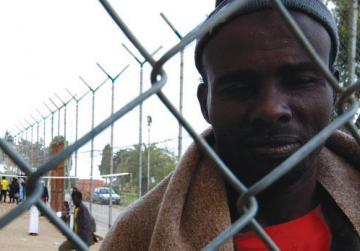 Somali asylum seekers who fled Libya by boat and were brought to Malta last weekend tell Patrick Cooke that Africans still risk beatings and even death in post-Gaddafi Libya.

Zakaria and a fellow Somali were exhausted after carrying out back-breaking manual labour for a Libyan man who had picked them up in ‘Krimea’, an area of Tripoli where the city’s underclass of sub-Saharan Africans congregate in the hope of finding work.

“When we finished, he told us ‘you are a friend of Gaddafi so I will not pay you, you killed our brothers’. Then he beat us with sticks and threatened us with a gun,” Zakaria tells The Sunday Times.

“Africans are being beaten and killed in Libya and no one there cares,” he adds to nods from his companions inside Lyster Detention Centre, where the 68 Somali asylum seekers rescued at sea last weekend are being housed.

A crowd gathers to share or listen to stories of life in post-revolution Libya for dark-skinned Africans, which are articulated into English by Zakaria and another asylum seeker, Abdul Karim.

‘Murtazaka’ – meaning ‘mercenary’ in Arabic – is a word they all know too well.

“Even now they all call us murtazaka. We cannot say anything because we have nothing and all Libyan men have guns. They say we are the brothers of Gaddafi,” says Abdul Karim.

Libya’s large population of sub-Saharan migrants came under suspicion from the beginning of the Libyan revolution last February, when it was widely reported that Muammar Gaddafi was using dark-skinned mercenaries to brutally suppress protests against his regime.

As the tide gradually swung in favour of the revolutionaries, reports emerged from human rights groups and the media of the killing and arbitrary detention of thousands of dark-skinned Libyans and sub-Saharan Africans accused of supporting Gaddafi, often with no corroborating evidence beyond their skin colour. “Many Somalis were killed and even now they are killing Somalis. We had to stay in our homes as much as possible,” says Zakaria.

Others tell stories of how men came to their homes and demanded money and mobile phones. One man says the most common word he heard directed at him in Libya was a vulgar Arabic word also used in Maltese.

The UNHCR were told similar stories by the new arrivals.

“They told of widespread looting and breaking into houses where sub-Saharan nationals are residing. Men are robbed and beaten; women have been raped – also in recent months. They explained that smugglers provided them with the only possible way out,” a UNHCR spokesman said.

Zakaria believes the main problem is the omnipresence of guns.

“At the moment all Libyans have guns, it is becoming like Somalia – no security and no stability. They have to collect the guns,” he says.

Efforts to unite the former militias under a single military command have so far failed and sporadic fighting between rival factions has continued. Libya’s interim leader warned this month the country risked sliding into civil war if militias were not disarmed.

Alarmingly, both Abdul Karim and Zakaria claim that they paid armed Libyan militiamen $400 each to facilitate their crossing of the Mediterranean.

The Sunday Times asked for clarification: did they pay the money to revolutionaries? “Of course, they were militia from the revolution. All of them are militia now, and there is much corruption,” says Abdul Karim.

“Many Libyan men wear uniforms now like that one (he points at a soldier in the room), even children wear them,” he adds.

Sub-Saharan Africans made similar claims in an article published by AFP on December 6. After their Europe-bound boat was intercepted by Libyan forces following its departure from Libya, they accused the former rebels of “organising this set-up”.

Last Thursday, AFP reported the Libyan Interior Ministry’s claim that 260 irregular migrants had been intercepted as they tried to enter Libya with three armed Libyans.

But Malta’s new arrivals prefer to look to the future.

“Our only hope is to live a safe life,” says Zakaria. “At least here we feel safe.”